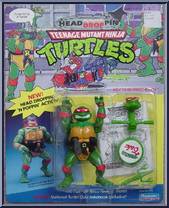 Raph's the Turtle-necked teen teaser. He doesn't go down for cover until the very last mutant moment! He's a reptilean risk-taker with a heavy-duty duckin' hero head. But that doesn't mean he's not a Foot fighter. Raph's ready with his scorpion sai and soda pop top. And when the goin' gets really rough, Raph's just a head drop away from super-shelled safety! Raph can keep his eyes above shell, too, when he peers his peepers into his nifty ninja sewer spy scope. Don't be alarmed when Raph pokes his head up in the midst of mayhem, though - he likes to taunt and tease the weak whiffers who whack at him!
Add to Collection - Add to Wishlist - Contribute 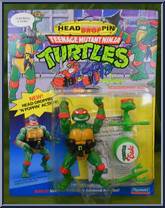 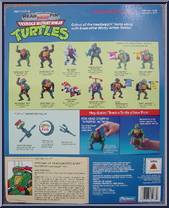 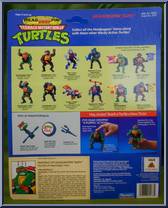 Enlarge
User Collections
The following users have Headdroppin' Raph in their collection:

Searching...
User Wishlists
The following users have Headdroppin' Raph on their wishlist: