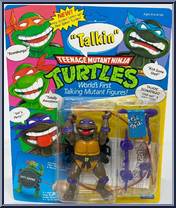 Enlarge
"Chill out!", "Let's Party!" and "Kowabunga!"
Favorite thing to do: Talk while inventing

Ever since Don invented the amphibious audio amplifier backpack, he's been barraged by boisterous bull sessions from his big-mouthed buddies. But that's okay, cuz Don likes loud lingo from his fellow Foot fighters. And he can yak back with the best of 'em. That's right! He can out-mumble Mike, rap better than Raph, be louder than Leo and silence Shredhead. Why? Because he invented the awesome amp backpack, that's why. So lean over and listen. Don's got the Mutant mouth to master tough Turtle talk!
Add to Collection - Add to Wishlist - Contribute

Please wait...
User Collections
The following users have Talkin' Donatello in their collection:

Searching...
User Wishlists
The following users have Talkin' Donatello on their wishlist: