Enlarge
Totally ruthless and utterly devoid of conscience, COBRA COMMANDER wants nothing less than to completely dominate the world through terrorism, social tyranny, and economic slavery! He is basically an ingenious hustler and junk-bond salesman with visions of grandeur, backed by legions of Cobra Vipers, a small air force and navy. A stickler for detail, Cobra Commander keeps track of his most remote Vipers with his radio-controlled, buzz-bomb, flying surveillance weapon equipped with wide-scan view monitor and thermal image enhancements.

"Most dictators and would-be Napoleon types are hampered by the need to pretend they are pursuing a noble and just cause. Cobra Commander doesn't have that problem. This guy's in it for the money and the power, and if anybody else is interested in these things, he can pick up an assault rifle and get in line behind him!"
Add to Collection - Add to Wishlist - Contribute 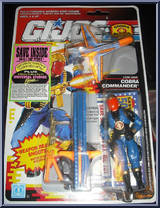 Enlarge
User Collections
The following users have Cobra Commander in their collection:

Searching...
User Wishlists
The following users have Cobra Commander on their wishlist: