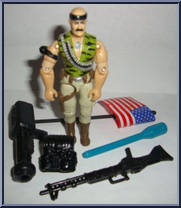 Enlarge
When the going gets rough, that's when the Marine Corps gets sent in. The same is true for G. I. Joe. When his buddies have their backs against the wall, that's when GUNG-HO moves in to do some heavy butt-kicking. The other G. I. Joes claim Gung-Ho is the scariest, craziest jar-head who ever kicked and clawed his way out of the Corps' ultimate hole in the swamp-Parris Island! What kind of hard-case considers an anti-tank missile launcher a personal weapon? Gung-Ho, that's who!
Add to Collection - Add to Wishlist - Contribute

Enlarge
User Collections
The following users have Gung-Ho in their collection:

Searching...
User Wishlists
The following users have Gung-Ho on their wishlist: