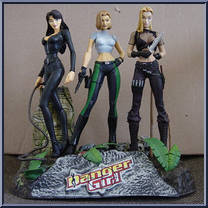 Enlarge
A re-release of the exclusive and wildly popular Danger Girls figures, based on the characters from J. Scott Campbell's comic book series. Originally released in 1999 by McFarlane Toys, these three voluptuous-but-deadly ladies have a brand-new sculpted base and are available in a collector's fish tank.

Abbey Chase is known as a champion marksman, a virtuoso of languages, a scholar of world history, and, most widely, as a heart-stopping femme fatale.

Sydney Savage, a striking, sassy and vivacious component of the Danger Girls, originates fittingly from the picturesque and lively continent of Australia.

Enlarge
User Collections
The following users have Dangerous Curves Ahead in their collection:

Searching...
User Wishlists
The following users have Dangerous Curves Ahead on their wishlist:

Searching...
Reviews of Dangerous Curves Ahead Toy Series
2.50 stars from somebody1
I bought this as an alternative to buying all 3 figures separately for a project. They're the exact same figures except they have pegs on their feet to fit into the base. The base also features a stack of skulls and an old wall you saw come with the individual figures. That's the only good thing that can be said of the base. It's nothing but super thing brittle plastic that reminds one of those hollow plastic railroad mountains/tunnels you get for train sets. It's never meant to be taken out of the package. The package itself is a very nice container that would make a good protective packaging for the figures once you created a new base. Overall it's the same figures glued to a base so unless you plan to just display it splurge and get the loose figures. UPDATE: I just got a better look...[See More]
4.70 stars from Henchmen4Hire
Espionage, danger, sexy women provocatively-dressed with guns and knives, who would have guessed the Danger Girl comic would take off so well? Shamefully, I don't know much about the Danger Girls due to lack of income while growing up which led to the lack of awesome comics, but a little research goes a long way! Sydney Savage - Prefers to use the shapely curves of her body than the curves of any gun or knife to subdue an opponent, but will use a sniper rifle when required. Likes to use bullwhips too (maybe the black full-body cat-suit tipped you off?). Abbey Chase - Champion marksman with most small firearms. Knowledgeable in world history, archeology, and many, many languages. Leader of the Danger Girl team. Natalia Kassle - The Russian spy who won't love you. An expert at...[See More]
Subseries from Danger Girl Toy Series
Contribute
The good folks here at Figure Realm try to give you accurate, unbiased, and most importantly, free information on action figures all day everyday! But of course, reviews and an occasional rant can only go so far, that 's why we encourage you to contribute! We're trying to build the largest, most informative, and simplest to use action figure gallery on the planet for every person out there to enjoy. Whether you want to know how many figures are in a series or the name of a certain figure or even if you just want to stare awestruck at all the pretty colors, galleries help everyone. What can you do to help? Glad you asked!

Write a review about Dangerous Curves Ahead.
User Comments
No user comments found.