Half vampire, half human, the tortured soul known only as Blade came into the world an orphan. His mother, bitten by the vampire Deacon Frost while she was pregnant, died during childbirth. Due to the circumstances of his birth, Blade's body has undergone certain genetic mutations. He possesses a vampire's superhuman strength and accelerated healing factor. Fueled by a constant craving for vengeance against the creatures that tainted his humanity and murdered his mother, Blade fashioned himself into a vampire hunter.
Add to Collection - Add to Wishlist - Contribute 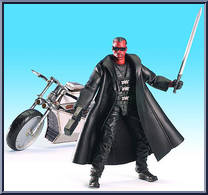 Enlarge
User Collections
The following users have Blade (Movie) in their collection:

Searching...
User Wishlists
The following users have Blade (Movie) on their wishlist:

Searching...
Reviews of Blade (Movie) Toy Series
5.00 stars from Deathlock66
Blade the vampire hunter .He has always been a faveourite character of mine he seems very bad bum esspecially in the movies.I bought him lose in great condition so he only comes with his coat and sunglasses.But they are the thing out of the figures stuff I would rather have.He has 38 Poa altoghether.The sculpt is brilliant toy biz have out done themselves yet again he looks so much like wesley snipes hes supposed to cos hes the movie figure in him.Hes got the vest like amour on with pockets and his silver disks or spikes folded up.On the side of the leg hes got stakes on.His coat is really nice too with the real leather like texture his sunglasses fit firmly on his head too.Overall this figure is exellent even with out his weapons but I can change that easily.Overall I highly recomend...[See More]
Subseries from Marvel Legends Toy Series
Contribute
The good folks here at Figure Realm try to give you accurate, unbiased, and most importantly, free information on action figures all day everyday! But of course, reviews and an occasional rant can only go so far, that 's why we encourage you to contribute! We're trying to build the largest, most informative, and simplest to use action figure gallery on the planet for every person out there to enjoy. Whether you want to know how many figures are in a series or the name of a certain figure or even if you just want to stare awestruck at all the pretty colors, galleries help everyone. What can you do to help? Glad you asked!