Michael Badilino witnessed his fathers gradual descent into madness following an encounter with the John Blaze Ghost Rider and later became a member of a special New York City police unit whose assigned function was to bring down the Dan Ketch Ghost Rider. Unaware this Ghost Rider was not the one who had struck down his father, Badilino became obsessed with slaying the vigilante. When his attempts failed, Badilino turned to Mephisto for assistance. Badilino believed Mephisto claimed his soul and transformed him into an entity known as Vengeance. In truth however, Mephisto had merely activated a power that already lurked deep within Badilinos soul. Unbeknownst to Michael, inside him lay a shard of the great Medallion of Power, an occult object that contained the essence of the spirits of Vengeance. 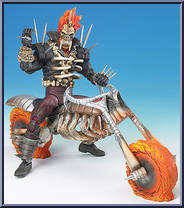 Enlarge
User Collections
The following users have Vengeance in their collection:

Searching...
User Wishlists
The following users have Vengeance on their wishlist:

Searching...
Reviews of Vengeance Toy Series
5.00 stars from fallen
Ghost-rider betrayed Mephisto now he has to get a new rider...VENGEANCE. Vengeance says it all, the devil Mephisto wants Vengeance on Ghost Rider and that's exactly why he gave Vengeance his name. Every collector absolutely needs to get this figure. Vengeance looks exactly like the comic book and has a great paint job. He comes with a Ghost Rider - Vengeance Will Be Mine comic book and a motorcycle with see through fire on his wheels. On the bottom of his wheels are little wheels so that it can move. On the bones, which holds the wheels on, there are stubs that stick out so that his feet can hook on and he can ride his motorcycle. He has see through fiery hair and two long fangs that stick out over his bottom jaw. He has spikes that stick out from his shoulder pads. He also has bone...[See More]
Subseries from Marvel Legends Toy Series
Contribute
The good folks here at Figure Realm try to give you accurate, unbiased, and most importantly, free information on action figures all day everyday! But of course, reviews and an occasional rant can only go so far, that 's why we encourage you to contribute! We're trying to build the largest, most informative, and simplest to use action figure gallery on the planet for every person out there to enjoy. Whether you want to know how many figures are in a series or the name of a certain figure or even if you just want to stare awestruck at all the pretty colors, galleries help everyone. What can you do to help? Glad you asked!