Walter Langowski had it all. Professional football player. A Ph.D. in physics. Millionaire status. He also had something else: thick orange fur, an ape-like physique, and clawed hands and feet. Walter designed and constructed a device to generate gamma radiation bombardments similar to those which had created the Hulk. He used this equipment on himself and was transformed into a ten-foot tall, superhumanly powerful creature. Walter called his bestial form 'Sasquatch,' the Canadian name for the legendary "Bigfoot" creature that he resembled. Once he learned how to maintain his normal personality and intelligence as Sasquatch he joined Alpha Flight. Walter Langowski continues to be his own successful experiment, a man changed into a superhuman Sasquatch with powers that can benefit all of mutantkind. 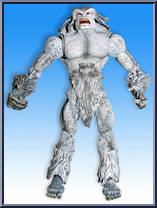 Enlarge
User Collections
The following users have Sasquatch in their collection:

Searching...
User Wishlists
The following users have Sasquatch on their wishlist:

Searching...
Subseries from Marvel Legends Toy Series
Contribute
The good folks here at Figure Realm try to give you accurate, unbiased, and most importantly, free information on action figures all day everyday! But of course, reviews and an occasional rant can only go so far, that 's why we encourage you to contribute! We're trying to build the largest, most informative, and simplest to use action figure gallery on the planet for every person out there to enjoy. Whether you want to know how many figures are in a series or the name of a certain figure or even if you just want to stare awestruck at all the pretty colors, galleries help everyone. What can you do to help? Glad you asked!