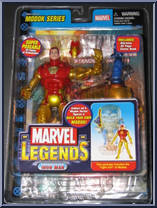 Gravely injured by an act of industrial sabotage, billionaire genius Tony Stark saved his own life by designing a life-sustaining shell -- the hi-tech armor that is the invincible Iron Man. Inspired to create a type of armor for every eventuality, Stark looked to one of his most indomitable of allies: The Mighty Thor. Similar to Thor's enchanted Hammer, Iron Main's Thor Buster armor is fueled by Asgardian magic -- as invincible as his original design and mystically powerful enough to defeat the Thundergod himself!
Add to Collection - Add to Wishlist - Contribute

Searching...
Reviews of Iron Man (Thor Buster) Toy Series
4.00 stars from universek7
This is a must have to any Iron Man Figure Series. Paint job is well done, along with great articulation. Out of all the Iron Man figures, this is probably by far my number 3 overall favorite. I love the individual fingers. This is a feature that they should include on all the figures instead of the all fingers move at once, such a hasbro has done. I wish they would make all his suits....[See More]
Subseries from Marvel Legends Toy Series
Contribute
The good folks here at Figure Realm try to give you accurate, unbiased, and most importantly, free information on action figures all day everyday! But of course, reviews and an occasional rant can only go so far, that 's why we encourage you to contribute! We're trying to build the largest, most informative, and simplest to use action figure gallery on the planet for every person out there to enjoy. Whether you want to know how many figures are in a series or the name of a certain figure or even if you just want to stare awestruck at all the pretty colors, galleries help everyone. What can you do to help? Glad you asked!