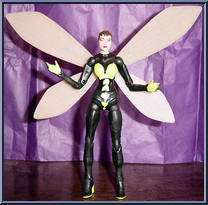 Trendsetter. Socialite. Super hero. Janet Can Dyne switches hats as often as her ex-husband, Giant Man, outgrows costumed identities. Despite the financial comfort afforded by a cast inheritance, she chooses to risk life and Lilliputian limb as the courageous Wasp -- standing tall as a founding member of the Avengers, Earth's Mightiest Heroes. Many criminal masterminds have underestimated the diminutive dynamo, only to find themselves on the receiving end of her bioelectric sting!
Add to Collection - Add to Wishlist - Contribute

Please wait...
User Collections
The following users have Wasp in their collection:

Searching...
User Wishlists
The following users have Wasp on their wishlist:

Searching...
Reviews of Wasp Toy Series
4.00 stars from Henchmen4Hire
I give this plain boring 6-inch figure a 4 because of the customizing potential. It's what every customizer dreams of, an all black figure, and a decent FEMALE figure to boot. And you get 4 wings! You can pop them off and make a fairy army led by Tinkerbelle something, get creative. The hands are a nice size, they don't look awful. The yellow areas are the only painted parts on the body, they have a matte finish. The black is semi-matte, I can't explain it, maybe my figure is just dirty, hah. The hair, eyes, and lips are also painted, but the eyes on mine look way too wide, almost surprised. I don't like how flat her hair is, but if that's the way it's in the comics then I can't complain too much, at least it's decently dry-brushed. I can't understand why they didn't give her forearm...[See More]
4.75 stars from Chancellor
This is probably my favorite female ML. Ms. Janet Van Dyne-Pym is complete in her current Wasp costume, and big, butterflyish wings. She has the same sculpt/body as Spider-Woman, only smaller hands, good paint job too, with light yellow on the bottom of her boots and hands. She also has short hair, which is currently not how her hair is in the comics, but whatever. So, she's has good looks, cool super powers, and a tight @ss, everything you'd want in a chic-action figure =). I'd buy her if I were you. She also comes with a part to the M.O.D.O.k. BAF, which is totally worth the whole series!!! ~Chancellor...[See More]
Subseries from Marvel Legends Toy Series
Contribute
The good folks here at Figure Realm try to give you accurate, unbiased, and most importantly, free information on action figures all day everyday! But of course, reviews and an occasional rant can only go so far, that 's why we encourage you to contribute! We're trying to build the largest, most informative, and simplest to use action figure gallery on the planet for every person out there to enjoy. Whether you want to know how many figures are in a series or the name of a certain figure or even if you just want to stare awestruck at all the pretty colors, galleries help everyone. What can you do to help? Glad you asked!