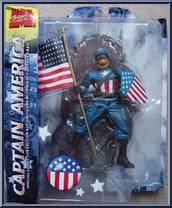 Enlarge
In 1940, as America prepared for war, young and frail Steve Rogers volunteered for an experiment that transformed him into the ultimate physical specimen: Captain America. Enhanced by the Super-Soldier Serum, Captain America's agility, strength, endurance and reaction time were superior to those of an Olympic-level athlete. Cap also mastered a number of fighting forms, including American-style boxing and judo. These abilities, combined with his indestructible shield, made him one of the finest human combatants Earth had ever known. Steve Rogers battled the Nazis until a mishap placed him in suspended animation deep within the Himalayan Mountains. Decades later he was discovered by Tony Stark and S.H.I.E.L.D. and became a cornerstone of the Ultimates.
Add to Collection - Add to Wishlist - Contribute 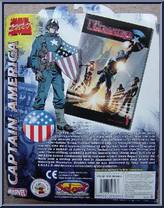 Enlarge
User Collections
The following users have WWII Captain America in their collection:

Searching...
User Wishlists
The following users have WWII Captain America on their wishlist:

Searching...
Subseries from Marvel Select Toy Series
Contribute
The good folks here at Figure Realm try to give you accurate, unbiased, and most importantly, free information on action figures all day everyday! But of course, reviews and an occasional rant can only go so far, that 's why we encourage you to contribute! We're trying to build the largest, most informative, and simplest to use action figure gallery on the planet for every person out there to enjoy. Whether you want to know how many figures are in a series or the name of a certain figure or even if you just want to stare awestruck at all the pretty colors, galleries help everyone. What can you do to help? Glad you asked!