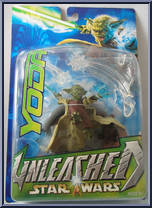 Enlarge
Yoda emanates a vast wisdom and power made all the more impresive by his humble deportment and diminutive size. A rarely seen species from an unknown homeworld, Yoda possesses capabilities that give him impressive strength and speed. While he is clearly the wise, elder statesman in the Jedi High Council, Yoda is also a superlative warrior who can overcome virtually any opponent. Well into his eighth century, he has learned to apply caution and reflection in discordant situations, but when war erupts, he does not hesitate to fight. He battles head-to-head with another powerful wielder of the Force, displaying great agility and masteful skills with his lightsaber. As the two foes clash, Yoda, empowered by the Force, leaps and twirls in the air, relentlessly battering his opponent. When he is forced to choose between saving the lives of his compatriots or executing the final blow in battle, Yoda chooses life over victory, allowing his enemy to escape. Yoda's powerful warrior skills as well as his wisdom will now be tested as the galaxy collapses into full-scale war.
Add to Collection - Add to Wishlist - Contribute

Enlarge
User Collections
The following users have Yoda in their collection:

Searching...
User Wishlists
The following users have Yoda on their wishlist:

Searching...
Subseries from Star Wars - Unleashed Toy Series
Contribute
The good folks here at Figure Realm try to give you accurate, unbiased, and most importantly, free information on action figures all day everyday! But of course, reviews and an occasional rant can only go so far, that 's why we encourage you to contribute! We're trying to build the largest, most informative, and simplest to use action figure gallery on the planet for every person out there to enjoy. Whether you want to know how many figures are in a series or the name of a certain figure or even if you just want to stare awestruck at all the pretty colors, galleries help everyone. What can you do to help? Glad you asked!