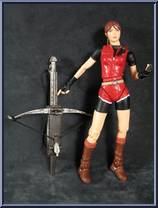 Claire Redfield is a tough and clever young woman who came to Raccoon City to uncover the mysterious circumstances surrounding the disappearance of Chris, her older brother and S.T.A.R.S. team member, but what she found instead was a city overrun by zombies. Now her only thought is to survive the nightmare that was once Raccoon City. She'll need to keep a cool head if she wants to keep her own head in the face of unspeakable odds as the entire town is consumed by the ravages of the Umbrella virus.

Zombies now run rampant throughout Raccoon City and as Claire seeks refuge in the Police Department, she is set upon by Zombie Cops, former defenders of the city, now out to protect and serve themselves as they patrol the streets in search of potential victims. These undead officers are not easily destroyed as the loss of a limb or two may slow them down but does not stop their appetite for human flesh.
Add to Collection - Add to Wishlist - Contribute 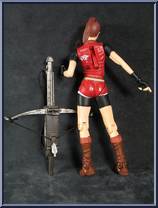 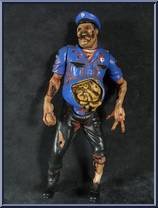 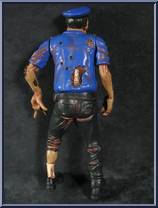 Searching...
Reviews of Claire Redfield / Zombie Cop Toy Series
4.50 stars from Omarsoto
When I first saw this figure I went crazy and bought it being the huge RE fan I am. anyways I was surprised by how well the paint job was done on claire. it looked so detailed and it looked just like her on the video game. out of all the RE figures I have, her "authentic video game action" lever on her back was the best working. her arm could actually be put to her side and be lifted all the way in the air unlike my other figures where you have to put their arms higher just so that their arms could lift more realistic.the zombie cop was well painted to with a lot of zombie detail. my only problem is keeping his body up sometimes when I moved his arms up to look like it was attaking its torso would come off. its a nice feature to be able to take apart its body but annoying as well. but...[See More]
Subseries from Resident Evil 2 Toy Series
Contribute
The good folks here at Figure Realm try to give you accurate, unbiased, and most importantly, free information on action figures all day everyday! But of course, reviews and an occasional rant can only go so far, that 's why we encourage you to contribute! We're trying to build the largest, most informative, and simplest to use action figure gallery on the planet for every person out there to enjoy. Whether you want to know how many figures are in a series or the name of a certain figure or even if you just want to stare awestruck at all the pretty colors, galleries help everyone. What can you do to help? Glad you asked!