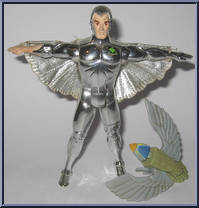 Enlarge
LT. QUICKSILVER - Jonathan Quick quickly became the leader of the Silverhawks and acts in the "leaderly" kind of way that's also seen in, say, Cyclops of the X-Men or Captain America of the Avengers. Quicksilver also apparently gets the perks of such leadership. He's usually the one who gets to keep TallyHawk around, and he's also got a plane of his own so he doesn't always have to fly around with Bluegrass and listen to Bluegrass's horrible music.
Add to Collection - Add to Wishlist - Contribute

Enlarge
User Collections
The following users have Quicksilver (with Tally-Hawk) in their collection:

Searching...
User Wishlists
The following users have Quicksilver (with Tally-Hawk) on their wishlist:

Searching...
Subseries from Silver Hawks Toy Series
Contribute
The good folks here at Figure Realm try to give you accurate, unbiased, and most importantly, free information on action figures all day everyday! But of course, reviews and an occasional rant can only go so far, that 's why we encourage you to contribute! We're trying to build the largest, most informative, and simplest to use action figure gallery on the planet for every person out there to enjoy. Whether you want to know how many figures are in a series or the name of a certain figure or even if you just want to stare awestruck at all the pretty colors, galleries help everyone. What can you do to help? Glad you asked!

Write a review about Quicksilver (with Tally-Hawk).
User Comments
No user comments found.