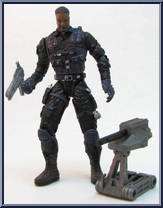 * Legs fold out on missile launcher and top pivots and extends up.
* Missile launcher folds u and can hang on back by the two hooks next to the legs.
* To Fire Missile: Pull back on missile shaft then release to fire.
* Gun can fit in either hand.
Add to Collection - Add to Wishlist - Contribute

Enlarge
User Collections
The following users have Al Simmons in their collection:

Searching...
User Wishlists
The following users have Al Simmons on their wishlist:

Searching...
Reviews of Al Simmons Toy Series
4.50 stars from Mr-X
Ahh has anyone NOT heard of the classic Spawn line? I’m guessing its very few people that can be put in that category. However, many people, myself at one point, wouldn’t have the slightest clue who Spawn was before well, he was Spawn. The man I’m speaking of, the one destined to become Spawn is Al Simmons, government assassin, murdered by his comrades and sent to Hell. Our good buddy Al stand bout 6 inches tall. He comes with two accessories, well technically three. The first is a machine gun type weapon. To me, it looks like something a future Punisher might use in battle. he also comes with a tripod backpack. Its a tripod pack because its also a missile launcher. The pack can either stand on its on via three small legs or it can hook into Simmons back by sticking two hooks in the pack...[See More]
Subseries from Spawn - Movie Toy Series
Contribute
The good folks here at Figure Realm try to give you accurate, unbiased, and most importantly, free information on action figures all day everyday! But of course, reviews and an occasional rant can only go so far, that 's why we encourage you to contribute! We're trying to build the largest, most informative, and simplest to use action figure gallery on the planet for every person out there to enjoy. Whether you want to know how many figures are in a series or the name of a certain figure or even if you just want to stare awestruck at all the pretty colors, galleries help everyone. What can you do to help? Glad you asked!