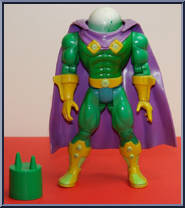 A cloud of smoke heralds the sudden appearance of one of Spider-Man's arch-foes - Mysterio! A former stunt man and special effects wizard who turned his knowledge of the art of creating illusion to the service of crime, this villainous mastermind employs an arsenal of ingenious devices against Spider-Man. Chief among these is a special spray which can dissolve Spidey's webbing in an instant, leaving him open to attack. Surely, the domed helmet of Mysterio must conceal the true face of evil!
Add to Collection - Add to Wishlist - Contribute

Enlarge
User Collections
The following users have Mysterio in their collection:

Searching...
User Wishlists
The following users have Mysterio on their wishlist:

Searching...
Reviews of Mysterio Toy Series
4.00 stars from Henchmen4Hire
Another great sculpt from the Spiderman line!! Just one look at Mysterio is all it takes to demonstrate that he is a force to be reckoned with. His suit is very nice!! He has the right color scheme which is light green, lavendar cape, yellow boots-gauntlets-belt, and that cool dome-head. His hands are in great shapes. They look like he is casting a spell or throwing one of his patented Holo-Cubes and seeing as how he is a chemist and a former special-effects man, this was a nice touch. I so badly wanted to give him 5 stars but he does have some minor flaws...like the huge gaping hole in his back. Aside from the standard collectible pin, Mysterio comes with a water-shooter-thingy that you can put in his back and use to shoot water jets from 2 small holes in his chest that are...[See More]
Subseries from Spider-Man Toy Series
Contribute
The good folks here at Figure Realm try to give you accurate, unbiased, and most importantly, free information on action figures all day everyday! But of course, reviews and an occasional rant can only go so far, that 's why we encourage you to contribute! We're trying to build the largest, most informative, and simplest to use action figure gallery on the planet for every person out there to enjoy. Whether you want to know how many figures are in a series or the name of a certain figure or even if you just want to stare awestruck at all the pretty colors, galleries help everyone. What can you do to help? Glad you asked!