Enlarge
Apocalypse is the evil mutant who has used his sinister genius and mutant ability to turn himself into a merciless one man army! Apocalypse is incredibly strong, able to change his size at will, and has created for himself a weapon system designed to destroy the X-Men. Apoclaypse is the most frightening evil mutant on Earth when he turns himself into a giant, puts on this deadly arsenal and attacks!
Add to Collection - Add to Wishlist - Contribute 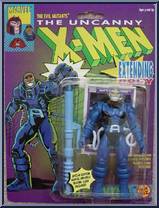 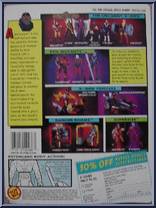 Enlarge
User Collections
The following users have Apocalypse in their collection:

Searching...
User Wishlists
The following users have Apocalypse on their wishlist:

Searching...
Reviews of Apocalypse Toy Series
5.00 stars from necornaut
Apocalypse, one of the baddest mutants of all time. I ranked him as a 5 because of his style resembling when he first appeared as a thinner taller mutant and later on he gets a bit more of a bulkier look. This one is a bit thinner but still yet looks as though he could kick some serious gluteus maximus. The figure itself comes with the ability to grow taller by extending the torso and the legs below the knee. It really doesn't make him that much taller, I mean he's a big guy so to begin with so no problem there. He comes with the usual tube-age coming out of the arms that you'd expect on an apocalypse figure. Overall sculpt on his is good, what you'd expect for the first apocalypse figure to come out, not super fantastic but good, the second edition really improved upon it making a more...[See More]
Subseries from X-Men Toy Series
Contribute
The good folks here at Figure Realm try to give you accurate, unbiased, and most importantly, free information on action figures all day everyday! But of course, reviews and an occasional rant can only go so far, that 's why we encourage you to contribute! We're trying to build the largest, most informative, and simplest to use action figure gallery on the planet for every person out there to enjoy. Whether you want to know how many figures are in a series or the name of a certain figure or even if you just want to stare awestruck at all the pretty colors, galleries help everyone. What can you do to help? Glad you asked!