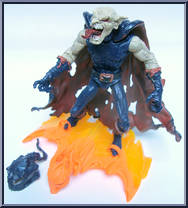 Enlarge
Spawned in another dimension and devoted to the "purification" of mankind, Demogoblin was committed to destroying all criminals. His crusade led him to continuous conflict with Spider-Man and many other super heroes - fights in which his magical abilities of flight and flame projection, and his supernatural strength assisted him greatly. Despite his evil origins, he was not without compassion, and he made the ultimate sacrifice to save the life of a child in danger.

Super-poseable figure comes with an attachable battle glider, and has a removable hood! An awesome character for your collection!
Add to Collection - Add to Wishlist - Contribute 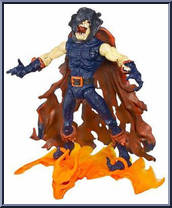 Enlarge
User Collections
The following users have Demogoblin in their collection:

Searching...
User Wishlists
The following users have Demogoblin on their wishlist:

Searching...
Subseries from Spider-Man Origins Toy Series
Contribute
The good folks here at Figure Realm try to give you accurate, unbiased, and most importantly, free information on action figures all day everyday! But of course, reviews and an occasional rant can only go so far, that 's why we encourage you to contribute! We're trying to build the largest, most informative, and simplest to use action figure gallery on the planet for every person out there to enjoy. Whether you want to know how many figures are in a series or the name of a certain figure or even if you just want to stare awestruck at all the pretty colors, galleries help everyone. What can you do to help? Glad you asked!