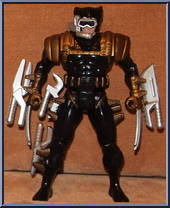 Enlarge
Before his transformation into the super hero called Wolverine, the man called Logan plied his trade as one of the world's foremost secret agents! His superhuman senses proved an invaluable asset in the realm of espionage, especially when enhanced by the most sophisticated sensing equipment money could buy! And his unequaled skill with razor edge weapons made him an unbeatable fighter - much to the regret of the enemies of world peace!
Add to Collection - Add to Wishlist - Contribute

Enlarge
User Collections
The following users have Wolverine (5th Edition) in their collection:

Searching...
User Wishlists
The following users have Wolverine (5th Edition) on their wishlist: