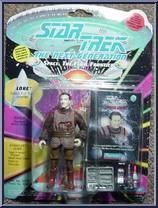 PROFILE: Lore was the first android produced by the brilliant cyberneticist, Dr. Noonian Soong. He was disassembled by Soong when colonists on his home planet, Omicron Theta, insisted that he was 'too perfect'. In retaliation, Lore summoned a vicious Crystalline Entity which destroyed the colony. Reassembled 26 years later, after his discovery by the crew of the U.S.S. Enterprise (Stardate 41242.4), Lore again revealed his violent nature, posing as his brother, Data, threatening the Enterprise with the Crystalline Entity. He was believed to be dead after being transported into space, but reappeared on Omicron Theta, killing his father after receiving an 'emotions' chip intended for Lieutenant Commander Data (Stardate 44085.7). Most recently, Lore led a faction of Borg in a new attack on the Federation.

IMPORTANT NOTE: Lore's dislike of the Federation has driven him to violence before. Any contact with Lore is to be considered extremely dangerous. 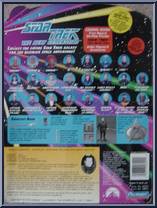 Enlarge
User Collections
The following users have Lore in their collection:

Searching...
User Wishlists
The following users have Lore on their wishlist: