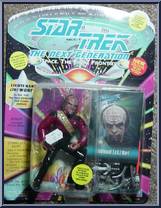 PROFILE: Worf is the first Klingon to serve in Starfleet. After Worf's Klingon parents were killed at the Khitomer Massacre, he was raised on the farming colony of Gault by his human parents from Earth, Sergey and Helena Rozhenko. Worf joined the Academy with his foster brother, who later left the Academy to work the family farm. He is perfectly suited for his duties as Security Officer and has received several commendations from his superior, Security Chief Tasha Yar. He was promoted to Chief of Security after Yar was killed by Armus on Vegra II.

COLLECTOR'S NOTE: This figure is an authentic reproduction of Lieutenant (JG) Worf as he appeared in the first season of the Star Trek: The Next Generation TV show. Items of notes are the placement and decoration of his pips and the piping at the top of his uniform. The lower collar on his burgundy uniform, representing the original version of the Next Generation Lieutenant Junior Grade's uniform, accented by the traditional Klingon gold sash.
Add to Collection - Add to Wishlist - Contribute 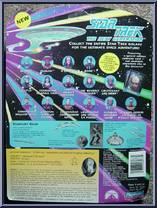 Enlarge
User Collections
The following users have Lieutenant Worf in their collection:

Searching...
User Wishlists
The following users have Lieutenant Worf on their wishlist: