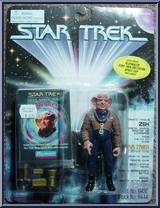 Visitor Profile: As Ferengi Grand Nagus, Zek has enormous power over Ferengi business. He is able to control commercial opportunities and allocate trade territories. This is considered to be the highest position a Ferengi is able to hold in his community because business and commerce are at the heart of Ferengi life. The Ferengi, as a whole, are known to be the shrewdest dealers in Federation space. Indeed, they are notorious for their questionable "business" practices.

In 2369, a trade conference was held aboard Deep Space Nine. It was here that Zek named Quark, a resident Ferengi businessman on the space station, as his successor to the position of Grand Nagus. This appointment and the subsequent staged death of Zek was all part of a plan to test Zek's son, Krax. In Ferengi tradition, when a Grand Nagus passes on, the body is preserved in a vacuum process. Then parts of the body are sold at a very high price. Those possessing a part of a deceased Grand Nagus are considered extremely prestigious in the Ferengi community.

Station Note: At times, raw greed dominates the reasoning of the Ferengi. And although the Ferengi do not run the most ethical business operations, their sole intention is not to bring harm to people they deal with. 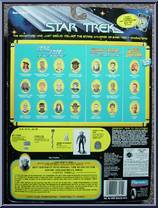 Enlarge
User Collections
The following users have Grand Nagus Zek in their collection:

Searching...
User Wishlists
The following users have Grand Nagus Zek on their wishlist:

Searching...
Subseries from Star Trek - Deep Space Nine Toy Series
Contribute
The good folks here at Figure Realm try to give you accurate, unbiased, and most importantly, free information on action figures all day everyday! But of course, reviews and an occasional rant can only go so far, that 's why we encourage you to contribute! We're trying to build the largest, most informative, and simplest to use action figure gallery on the planet for every person out there to enjoy. Whether you want to know how many figures are in a series or the name of a certain figure or even if you just want to stare awestruck at all the pretty colors, galleries help everyone. What can you do to help? Glad you asked!