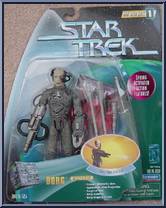 The Borg are a collection of cybernetically enhanced humanoids linked into a group consciousness. Implanting of cybernetic devices begins shortly after birth, and continues throughout the Borg's lifespan. They exist solely to assimilate the technology and raw materials of other species. From their perspective, assimilation of other life forms improves those species. Each Borg is linked into a sophisticated subspace communications network, in which the idea of the individual is a meaningless concept. The Borg hive culture is ruled by a Queen who exists beyond humanoid notions of three-dimensional space. The Borg originated somewhere in the Delta Quadrant. Their first attack against the Federation was in 2366, and were stopped just short of conquering Earth by the Enterprise-D. A second attack in 2373 was foiled by Captain Jean-Luc Picard and the Enterprise-E crew.
Add to Collection - Add to Wishlist - Contribute 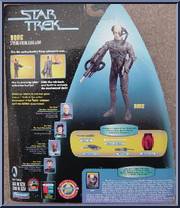 Enlarge
User Collections
The following users have Borg in their collection:

Searching...
User Wishlists
The following users have Borg on their wishlist:

Searching...
Subseries from Star Trek - Warp Factor Toy Series
Contribute
The good folks here at Figure Realm try to give you accurate, unbiased, and most importantly, free information on action figures all day everyday! But of course, reviews and an occasional rant can only go so far, that 's why we encourage you to contribute! We're trying to build the largest, most informative, and simplest to use action figure gallery on the planet for every person out there to enjoy. Whether you want to know how many figures are in a series or the name of a certain figure or even if you just want to stare awestruck at all the pretty colors, galleries help everyone. What can you do to help? Glad you asked!