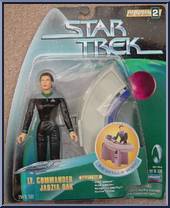 Jadzia Dax is from a joined species called the Trill. She consists of a humanoid host and a molluscoid symbiont. While the host lives a typical humanoid lifetime, the symbiont is transplanted from one host to another, carrying with it the memories of prior lives. Jadzia is the eighth joining for Dax. The prior hosts were Lela, Tobin, Emony, Audrid, Torias, Joran and Curzon. Curzon Dax was a Federation diplomat, and instrumental in negotiating a lasting peace treaty with the Klingon Empire. Jadzia Dax has a strong interest in Klingon culture and political affairs, no doubt thanks to Curzon's experiences. Dax and Jadzia were joined in 2367. The joined Trill was assigned the rank of Lieutenant and stationed as science officer in 2369 on Deep Space Nine. In 2372, she was promoted to the rank of Lieutenant Commander.
Add to Collection - Add to Wishlist - Contribute 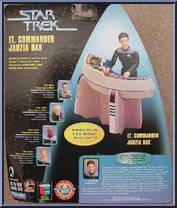 Searching...
Subseries from Star Trek - Warp Factor Toy Series
Contribute
The good folks here at Figure Realm try to give you accurate, unbiased, and most importantly, free information on action figures all day everyday! But of course, reviews and an occasional rant can only go so far, that 's why we encourage you to contribute! We're trying to build the largest, most informative, and simplest to use action figure gallery on the planet for every person out there to enjoy. Whether you want to know how many figures are in a series or the name of a certain figure or even if you just want to stare awestruck at all the pretty colors, galleries help everyone. What can you do to help? Glad you asked!