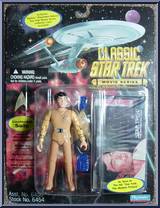 Lieutenant Hikaru Sulu had been the helmsman for the Starship Enterprise under Captain James T. Kirk during its famous five-year mission. Born in San Francisco, the home of Starfleet Academy, Sulu happened to be in that area when a strange, alien threat appeared in the galaxy. An immense "cloud", measured at 82 AU, seemed to pose a threat to the Earth. The Enterprise had just been refurbished in orbital drydock when Admiral Kirk became involved in the operation to investigate and encounter this space object. Starfleet Commander Admiral Nogura decided that Kirk and the Enterprise crew were the ones with the most experience in such situations. Mr. Sulu was, of course, Admiral Kirk's first choice to guide the Enterprise on this crucial mission. After assembling his old crew, Admiral Kirk discovered that the "cloud" was actually a probe called V'Ger. Originally a Voyager spacecraft, alien technology accidentally caused it to evolve into a hostile probe. But because of Mr. Sulu's performance and that of the other crew members, this incident was resolved successfully.

Please wait...
User Collections
The following users have Lieutenant Sulu in their collection:

Searching...
User Wishlists
The following users have Lieutenant Sulu on their wishlist:

Searching...
Subseries from Star Trek - Classic Toy Series
Contribute
The good folks here at Figure Realm try to give you accurate, unbiased, and most importantly, free information on action figures all day everyday! But of course, reviews and an occasional rant can only go so far, that 's why we encourage you to contribute! We're trying to build the largest, most informative, and simplest to use action figure gallery on the planet for every person out there to enjoy. Whether you want to know how many figures are in a series or the name of a certain figure or even if you just want to stare awestruck at all the pretty colors, galleries help everyone. What can you do to help? Glad you asked!