Enlarge
Fei Long is the international film star that has the movie industry ablaze. Although under contact from Hong Kongs movie studios Fei Long still craves the thrill of a real fight and enters underground street fighting tournaments. Fei Long was trained by Chun Lis Father Durai in their private dojo.

Fei Long was modeled after the late Bruce Lee. His fighting style and game mechanics very closely resemble the former martial artist actor. CAPCOM was not the only game company to pay homage to the late actor, NAMCO also modeled the fighter law to resemble him as well.
Add to Collection - Add to Wishlist - Contribute 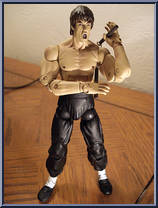 Enlarge
User Collections
The following users have Fei Long in their collection:

Searching...
User Wishlists
The following users have Fei Long on their wishlist:

Searching...
Reviews of Fei Long Toy Series
4.50 stars from Kyle Robinson
This is my first Street Fighter (SOTA) figure and may I just say IT'S FREAKIN' BEAUTIFUL! I've always wanted a few of these figures but never wanted to fish out the $13.00 to $25.00 for one. They even reach up to about $50.00 for a Ryu online. I purchased Feilong at Sun Coast at my local shopping mall, on the 50% off rack for $6.50 so I snagged him up (I also got 3 ML Wonder Man figures for $3.50 a pop) ....anyway..... I usually categorize figures 3 ways: "Custom Fodder", "FIX it and keep it", and "Straight up KEEPER!" (rare). Feilong is almost a "Straight up KEEPER!" but I had to fix a few things so he's a "FIX it and keep it". First Lets go over the PROS which their is a lot of. First and foremost, the best part of all the Street Fighter (SOTA) figures is that most of them come with 2...[See More]
Subseries from Street Fighter Toy Series
Contribute
The good folks here at Figure Realm try to give you accurate, unbiased, and most importantly, free information on action figures all day everyday! But of course, reviews and an occasional rant can only go so far, that 's why we encourage you to contribute! We're trying to build the largest, most informative, and simplest to use action figure gallery on the planet for every person out there to enjoy. Whether you want to know how many figures are in a series or the name of a certain figure or even if you just want to stare awestruck at all the pretty colors, galleries help everyone. What can you do to help? Glad you asked!