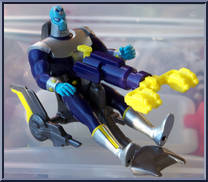 The fusion of alien lifeform and computer, Evil Alien Brainiac uses telekintec powers and a blasting space sled to control his enemies as he attempts to conquer the universe.
Add to Collection - Add to Wishlist - Contribute

Enlarge
User Collections
The following users have Brainiac (Evil Alien) in their collection:

Searching...
User Wishlists
The following users have Brainiac (Evil Alien) on their wishlist:

Searching...
Reviews of Brainiac (Evil Alien) Toy Series
4.00 stars from Henchmen4Hire
Superman's greatest nemesis, Brainiac stands about 4.75 inches with basic 5-point articulation with bonus articulation at the waist. He looks exacty like he did on the cartoon with the blue skin and purple/silver/yellow suit colors, and that is always a good thing. His right hand is open so it looks like he is shooting one of those crazy beams he uses out of his hands. His left arm is bent with a fist so he can hold the purple blaster he comes with which shoots a large yellow projectile. But like most shooting weapons, once the spring inside gets worn out, it becomes almost useless. Brainiac comes with his fancy hover-chair-tank vehicle [albeit, a VERY simplified version of it] which was a good idea since he used it often in the show [eventhough he can fly without the chair...]. It looks...[See More]
Subseries from Superman - Animated Series Toy Series
Contribute
The good folks here at Figure Realm try to give you accurate, unbiased, and most importantly, free information on action figures all day everyday! But of course, reviews and an occasional rant can only go so far, that 's why we encourage you to contribute! We're trying to build the largest, most informative, and simplest to use action figure gallery on the planet for every person out there to enjoy. Whether you want to know how many figures are in a series or the name of a certain figure or even if you just want to stare awestruck at all the pretty colors, galleries help everyone. What can you do to help? Glad you asked!