The Flash
The Scarlet Speedster

Powers: Flash is the fastest man alive. Can run at super-speed. Can vibrate his body so quickly as to be immaterial, so that bullets pass through him, or can go through walls. Can also move so fast he becomes invisible. Can run on water. 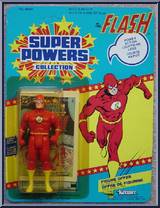 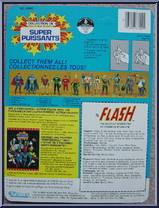 Enlarge
User Collections
The following users have Flash in their collection:

Searching...
User Wishlists
The following users have Flash on their wishlist:

Searching...
Reviews of Flash Toy Series
5.00 stars from uhhuhhuh
The Flash is a common figure that you will find just about at every corner. I bought my first loose/complete figure in 2000 from After Hours Toys for around $8.00. It had the common nose rub, so I sold it. I bought another for $10.00, with the same facial flaw. So I bought one on a Canadian 12-back card for $23.00. I opened it and finally had a nice C-9 figure. A loose/complete runs $8.00 to $12.00. A C-8/9 carded Flash will run around $25.00 to $45.00. Though one of the most common figures, this version of Flash still is still a classic sculpt!...[See More]
Subseries from Super Powers Toy Series
Contribute
The good folks here at Figure Realm try to give you accurate, unbiased, and most importantly, free information on action figures all day everyday! But of course, reviews and an occasional rant can only go so far, that 's why we encourage you to contribute! We're trying to build the largest, most informative, and simplest to use action figure gallery on the planet for every person out there to enjoy. Whether you want to know how many figures are in a series or the name of a certain figure or even if you just want to stare awestruck at all the pretty colors, galleries help everyone. What can you do to help? Glad you asked!