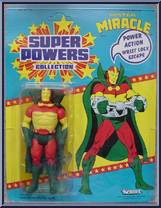 Powers: Mister Miracle is an incredible escape artist who can free himself from any trap or ambush. By calling upon a multitude of advanced scientific gadgets, and his remarkable dexterity and agility, Mister Miracle is able to make any impossible stunt look easy.

Weaknesses: Mister Miracle has no other special powers. He is mortal and vulnerable to attack.

Enemies: Darkseid and the minions of Apokolips. 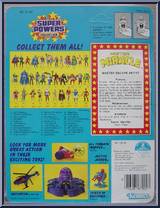 Enlarge
User Collections
The following users have Mister Miracle in their collection:

Searching...
User Wishlists
The following users have Mister Miracle on their wishlist:

Searching...
Reviews of Mister Miracle Toy Series
4.90 stars from uhhuhhuh
As a child growing up in the '80's, I never saw this figure in the store. If I had found it in the aisles, I probably would've bought it. I truly do believe this was arguably one of the best figures out of the entire Super Powers line. The card's artwork is AWESOME!! Surprisingly, I didn't see any of the third series in the stores. I guess due to their short and limited release, I just didn't see any if there were any to be found. A guy I rode the bus with in high school told me that he bought the Cyborg and Plastic Man figures at Kroger for around $1.99 each. I never saw them, but at that time (1996), he said he still had them in the package and was going to hold on to them. I do remember seeing a bunch of the first and second series figures. The last figures that I remember seeing on a...[See More]
Subseries from Super Powers Toy Series
Contribute
The good folks here at Figure Realm try to give you accurate, unbiased, and most importantly, free information on action figures all day everyday! But of course, reviews and an occasional rant can only go so far, that 's why we encourage you to contribute! We're trying to build the largest, most informative, and simplest to use action figure gallery on the planet for every person out there to enjoy. Whether you want to know how many figures are in a series or the name of a certain figure or even if you just want to stare awestruck at all the pretty colors, galleries help everyone. What can you do to help? Glad you asked!