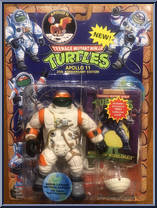 Hello moon, goodbye Houston! It's Moon Landin' Michaelangelo, the first Turtle to explore beneath the surface of that radical rock we so casually call "the moon." This space boy's diggin' the dirt, searchin' for lunar sauce. That's right! He's got a hero hunch that beneath the surface lies a space pool of the richest, ripest tomato sauce in the Milky Way. Harnessed up with his portable lunar life pack with Turtle tubing, Moon Landin' Michaelangelo's ready to drill deep and never sleep 'til he strikes sauce. His oxygenating space helmet keeps the air in, but if there's sauce around, he'll smell it nonetheless. Of course, even when he's searchin' and explorin', Moon Landin' Michaelangelo's thinkin' back about those three brave dudes who trained on some funky playground equipment, got used to zero gravity, then shot off for that massive mound in the sky. It makes Moon Landin' Michaelangelo's day to plant his anti-gravity American flag in the moondust, just like the astronauts before him. Along with his moon mission buddies, Lunar Leonardo, Touchdown Donatello and Retro Rocket Raphael, Moon Landin' Michaelangelo's hopin' he'll be especially lucky, too. When he plops the flag pole down into the moon surface, he may just get a gush of the moon sauce he's lookin' for! It's a countdown to chow down!
Add to Collection - Add to Wishlist - Contribute 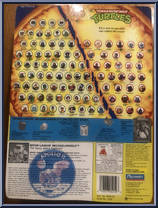 Enlarge
User Collections
The following users have Moon Landin' Michaelangelo in their collection:

Searching...
User Wishlists
The following users have Moon Landin' Michaelangelo on their wishlist: