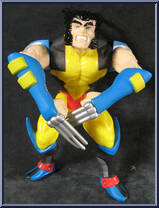 Enlarge
When Wolverine wants to really cut loose, he activates the Danger Room's Sabretooth Robot Fighter. With adamantium plating, the droid can withstand and quickly recover from any attack, just like the real Sabretooth. And Wolverine's going to need the extra practice, because without his adamantium bones and claws, his next battle with the real Sabretooth might be his last!
Add to Collection - Add to Wishlist - Contribute

Enlarge
User Collections
The following users have Wolverine in their collection:

Searching...
User Wishlists
The following users have Wolverine on their wishlist: