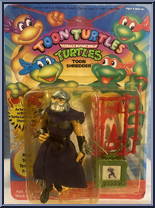 He's tall, he's tough, he's in full Toon color! He's Shredder, the evil head of the notorious Foot Clan - and he's out of the TV and takin' over the real world. Can no one stop this multi-colored madman from destroying all that we hold dear and near to our hearts? Can no one protect us from his animated army of Foot fighters? Is there no hope for civilization? Just look at the weapons they drew for this guy: Cutting Armor, great for gratin' good guys. Next he's armed with his scribble sword, and yes, it's very sharp. Two ninja stars for tossin' at the Turtle teens. Not to mention his doodlin' fist daggers and kama. And worst of all, he's not afraid to use them! Shredder fights a neverending battle against truth, justice and the American way. Basically, he's not a nice guy.
Add to Collection - Add to Wishlist - Contribute

Please wait...
User Collections
The following users have Toon Shredder with Toon Texture in their collection:

Searching...
User Wishlists
The following users have Toon Shredder with Toon Texture on their wishlist: