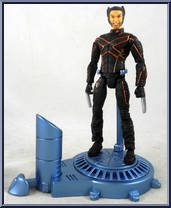 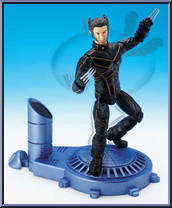 Enlarge
User Collections
The following users have Wolverine (Super-Poseable) in their collection:

Searching...
User Wishlists
The following users have Wolverine (Super-Poseable) on their wishlist:

Searching...
Reviews of Wolverine (Super-Poseable) Toy Series
5.00 stars from necornaut
I really like this wolverine figure for the movies, it was way better than the figure for the first movie in most every way. The figure itself had good articulation but it had this terrible thigh joint, I mean I don't have too much of a problem with the joint in the middle of the thigh but his is at this weird slant, I mean for posing purposes its okay but not great, this really shouldn't be a reason not to get this figure. The claws on this wolverine were relatively straight to my surprise and not all bendy, which is always a plus, he is overall a really good wolverine and fits in well with marvel legends as well as any marvel movie line, so you could stand your new x-men with the fantastic four and he fits in fine. The base he comes with is kinda cool, I think its so that he can do...[See More]
Subseries from X2: X-Men United Toy Series
Contribute
The good folks here at Figure Realm try to give you accurate, unbiased, and most importantly, free information on action figures all day everyday! But of course, reviews and an occasional rant can only go so far, that 's why we encourage you to contribute! We're trying to build the largest, most informative, and simplest to use action figure gallery on the planet for every person out there to enjoy. Whether you want to know how many figures are in a series or the name of a certain figure or even if you just want to stare awestruck at all the pretty colors, galleries help everyone. What can you do to help? Glad you asked!