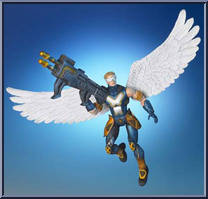 Please wait...
User Collections
The following users have Angel (Bird of Prey) in their collection:

Searching...
User Wishlists
The following users have Angel (Bird of Prey) on their wishlist:

Searching...
Reviews of Angel (Bird of Prey) Toy Series
5.00 stars from colten frost
Man do I love this figure he rocks!! I really love the fact that you can move each finger separately!! Once you take off his shades he’s got a gorges face far better than his marvel legends counterpart on that note his wings are also ten times better they look more like wings, were as the other ones look more like a saucer than wings!! Although they are made from black plastic so they tend to chip a bit as dose the bronze on his body and his arms, which are a cream color plastic. He has a bit of a problem with holding his gun/torpedo launcher and only the top one fires the bottom is just a spare, they also shoot in strange directions (not straight forward, but to the side a bit). His neck has a strange craning forward thing happening, it doesn’t make much difference though unless you’re a...[See More]
Subseries from X-Men - 2006 Series Toy Series
Contribute
The good folks here at Figure Realm try to give you accurate, unbiased, and most importantly, free information on action figures all day everyday! But of course, reviews and an occasional rant can only go so far, that 's why we encourage you to contribute! We're trying to build the largest, most informative, and simplest to use action figure gallery on the planet for every person out there to enjoy. Whether you want to know how many figures are in a series or the name of a certain figure or even if you just want to stare awestruck at all the pretty colors, galleries help everyone. What can you do to help? Glad you asked!