AGENT FOX MULDER
Oxford-educated, brilliant and driven, Agent Fox Mulder was one of the leading investigators in the Violent Crimes division of the FBI, until he requested to transfer to an obscure area of the Bureau known as the X-Files. There he earned the reputation as a renegade agent, investigation cases which the FBI deemed "unexplained" due to their paranormal nature. But Mulder quickly learned that the X-Files were cases that the government did not want solved--and forces within the government would go to any length to ensure that these cases remained a mystery. Compelled by his belief that his sister was abducted by aliens when he was 12 years old, Mulder is willing to risk everything to find what he desires most--the Truth.
Add to Collection - Add to Wishlist - Contribute 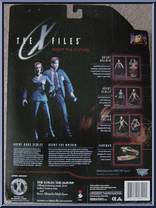 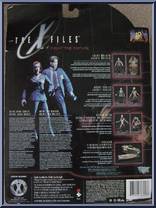 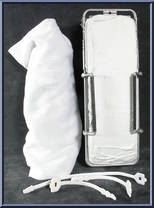 Searching...
Subseries from X-Files - Fight the Future Toy Series
Contribute
The good folks here at Figure Realm try to give you accurate, unbiased, and most importantly, free information on action figures all day everyday! But of course, reviews and an occasional rant can only go so far, that 's why we encourage you to contribute! We're trying to build the largest, most informative, and simplest to use action figure gallery on the planet for every person out there to enjoy. Whether you want to know how many figures are in a series or the name of a certain figure or even if you just want to stare awestruck at all the pretty colors, galleries help everyone. What can you do to help? Glad you asked!