Enlarge
The Batmobile from Batman The Animated Series is two vehicles in one, with a Launching Pursuit Jet for surprise attacks!
Add to Collection - Add to Wishlist - Contribute 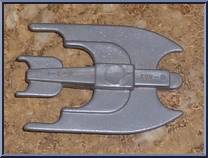 Enlarge
User Collections
The following users have Batmobile in their collection:

Searching...
User Wishlists
The following users have Batmobile on their wishlist:

Searching...
Reviews of Batmobile Toy Series
3.00 stars from batman26
I love this batmobile but the toy is pretty dissappointing. It is not a two seater so it can't fit robin in it. it also has no missile launchers. instead, it has a "launching persuit jet." wooooo. the only cool feature is that the wheels extend to disable the jokermobile's tires.(it is too bad that kenner failed to make any normal bad guys or vehicles for batman to beat up or have car chases with) The best part of this toy is that it's appearance is identical to it's tv show counterpart...[See More]
Subseries from Batman - Animated Series Toy Series
Contribute
The good folks here at Figure Realm try to give you accurate, unbiased, and most importantly, free information on action figures all day everyday! But of course, reviews and an occasional rant can only go so far, that 's why we encourage you to contribute! We're trying to build the largest, most informative, and simplest to use action figure gallery on the planet for every person out there to enjoy. Whether you want to know how many figures are in a series or the name of a certain figure or even if you just want to stare awestruck at all the pretty colors, galleries help everyone. What can you do to help? Glad you asked!