Enlarge
As one of Emperor Palpatine's most loyal administrators, Grand Moff Tarkin devised and administered the construction of the first Death Star battle station. The governor rules a large section of the Outer Rim Territories, including Tatooine, with an iron fist of terror and brutality.
Add to Collection - Add to Wishlist - Contribute 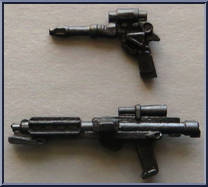 Enlarge
User Collections
The following users have Grand Moff Tarkin in their collection:

Searching...
User Wishlists
The following users have Grand Moff Tarkin on their wishlist: