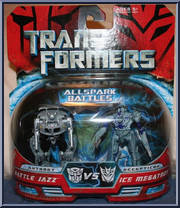 Enlarge
In the final battle for the AllSpark, Megatron cuts a swath across a human city, destroying everything he sees. With the other Autobots occupied by Decepticon Brawl, Autobot Jazz is the only soldier left to take on the Decepticon leader, though he knows he doesn't stand a chance against the mighty Megatron. As he confronts the immense tyrant, he knows that no matter what occurs, he will have gone down defending the weak, fighting as a true Autobot.
Add to Collection - Add to Wishlist - Contribute

Please wait...
Subseries from Transformers - Movie Toy Series
Contribute
The good folks here at Figure Realm try to give you accurate, unbiased, and most importantly, free information on action figures all day everyday! But of course, reviews and an occasional rant can only go so far, that 's why we encourage you to contribute! We're trying to build the largest, most informative, and simplest to use action figure gallery on the planet for every person out there to enjoy. Whether you want to know how many figures are in a series or the name of a certain figure or even if you just want to stare awestruck at all the pretty colors, galleries help everyone. What can you do to help? Glad you asked!