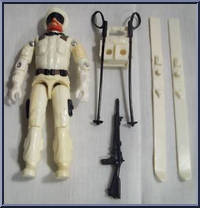 Enlarge
Snow Job was a major Olympic Biathalon contender. He enlisted initially for the special training and support privileges that the army gives to Olympic champions. However, to the consternation of army PR flacks, Snow Job volunteered and was accepted into the G. I. Joe team!

Submitted by Rock 'n Roll: "You think we call him Snow Job because he does his job on skis? Negative. He's a con artist, pure and simple, except when he picks up his rifle-sure as heck, something's gonna fall down!"
Add to Collection - Add to Wishlist - Contribute

Enlarge
User Collections
The following users have Snow Job in their collection:

Searching...
User Wishlists
The following users have Snow Job on their wishlist: