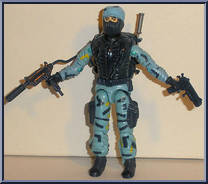 Enlarge
Shockwave was the youngest member of the Detroit Police Department S.W.A.T. Team, and the holder of two citations for bravery when he signed up for, and was accepted by, the Joe Team. When asked why he left a promising career to work longer hours for less money, kicking down doors on better armed adversaries, Shockwave replied, "What, you think I do this for the money?"

"Everybody on a S.W.A.T. team has a specific job, like in a choir. Choirs have tenors, baritones, altos, etc. S.W.A.T. teams have sharpshooters, climbers, and 'inside men.' Shockwave is the doorkicker. He's the first inside and the first to find out how bad it really is. He's also a half-decent tenor when his voice is in shape . . . "
Add to Collection - Add to Wishlist - Contribute 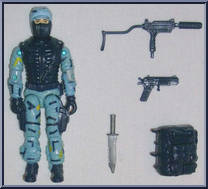 Enlarge
User Collections
The following users have Shockwave in their collection:

Searching...
User Wishlists
The following users have Shockwave on their wishlist: