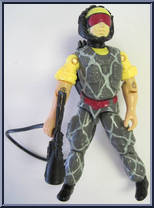 "It's almost impossible to stay undetected as long as this guy is in the field! As soon as your position is discovered, you might as well 'call it a day' because he is going to radio in for an air strike on your location before you can get away! Once he has you, he has you!"
Add to Collection - Add to Wishlist - Contribute

Enlarge
User Collections
The following users have Tele-Viper in their collection:

Searching...
User Wishlists
The following users have Tele-Viper on their wishlist: