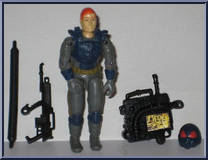 Enlarge
As a childhood chore, CHARBROIL had to heat the water pipes in the family basement with a blowtorch to keep them from freezing and bursting in the winter. As a teenager, he worked in the mills on the Great Lakes, feeding coal into blast furnaces. When the recruiting sergeant asked him what type of job he was interested in, he replied, "What have you got with open flames?"

"Flame weapons are scary to the max. Why do you think he wears that asbestos suit? He's the only one on the Night Force squad who enjoys wearing a full tank of jellied gasoline on his back. Do you know what happens if a hot tracer round hits that? Would you want to be standing next to him? For a flamethrower specialist, he's a pretty nice guy but with that thing on his back, he isn't going to win a popularity contest in the middle of a firefight."
Add to Collection - Add to Wishlist - Contribute

Please wait...
User Wishlists
The following users have Charbroil on their wishlist: