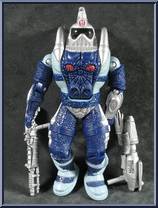 Enlarge
Thought to be a mythical creature of ancient cosmic lore, the entire universe was shocked when Iguanus recently appeared on the planet Mastodon, hunting its giant creatures and eating them raw-horns and all! A part-time bounty hunter and full-time meat eater, nothing can escape his capture after he locks onto its scent. If you're going to explore a star sector near Mastodon, take along plenty of lasers and set them all to full power!
Add to Collection - Add to Wishlist - Contribute 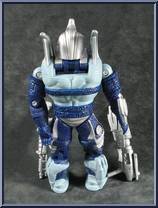 Enlarge
User Collections
The following users have Iguanas in their collection:

Searching...
User Wishlists
The following users have Iguanas on their wishlist:

Searching...
Subseries from G.I. Joe - A Real American Hero Toy Series
Contribute
The good folks here at Figure Realm try to give you accurate, unbiased, and most importantly, free information on action figures all day everyday! But of course, reviews and an occasional rant can only go so far, that 's why we encourage you to contribute! We're trying to build the largest, most informative, and simplest to use action figure gallery on the planet for every person out there to enjoy. Whether you want to know how many figures are in a series or the name of a certain figure or even if you just want to stare awestruck at all the pretty colors, galleries help everyone. What can you do to help? Glad you asked!