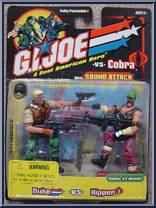 Enlarge
DUKE is a natural leader, and nobody knows that more than the soldiers he commands. Trained as an Airborne Infantryman, DUKE served in Southeast Asia with the Army's Special Forces Unit, where he earned numerous medals for his selfless heroism. He passed up an officer's commission when he was given the opportunity to handpick the best of the best to form the core of the G. I. JOE team. He believes in leading by example, which is why he's always alongside his troops in the thick of battle. DUKE does not let his feelings come before the mission's goals-but he does take the battle against COBRA COMMANDER personally.

"I'm out to stop the guy at the top of COBRA because in the end, he is responsible for all the evil done by his forces."

Anti-social and proud of it, DREADNOK RIPPER has been taking out his anger on the world since he was expelled from nursery school for bribery and aggravated assault. Black-listed from every outlaw biker gang in his native Tasmania for excessive nastiness and inadequate personal hygiene, he sought out ZARTAN at his secret swamp hide-out and joined the DREADNOKS, who overlook his bad points since he pays his dues on time and doesn't spend a lot of time in the bathroom. DREADNOK RIPPER hates everything and everybody. He likes nothing better than ripping things to shreds with crude sharp-edged tools. After he tears things apart, he enjoys jumping up and down on top of the pieces while wearing his big hob-nailed engineer boots and shouting naughty verses at the top of his lungs. DUKE is way up there at the top of his hate-list simply for being brave, honest, and well-groomed. "It wouldn't hurt him to skip shaving once in a while, would it?"

"It ain't true that I hates everything. That's a load o' rubbish. I likes grape soda and chocolate-covered donuts, don't I?"
Add to Collection - Add to Wishlist - Contribute 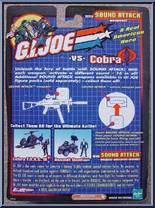 Enlarge
User Collections
The following users have Duke vs. Ripper in their collection:

Write a review about Duke vs. Ripper.
User Comments
No user comments found.