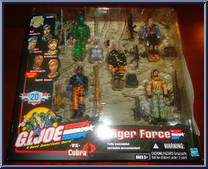 Enlarge
AGENT JINX studied and competed in three forms of martial arts from the time she was seven until she graduated from Bryn Mawr. Upon arriving in Japan for a vacation, she discovered that her family had been ninjas for generations, and she was officially initiated into the clan. She was recruited for the G. I. JOE team by SNAKE EYES. AGENT JINX should never be underestimated. She has been to the Secret Mountain and studied the Seven Silent Forms with the Blind Master. She has the Eye That Pierces, the Iron Hand, and the Heart That Waits. With her formidable skills, she was a natural choice to become a key member of the TIGER FORCE team.

"I can see through my enemy's deceptions, batter aside their strongest defenses, and overpower them with the strength of my will."
Add to Collection - Add to Wishlist - Contribute 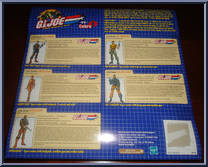 Enlarge
User Collections
The following users have Tiger Force (Toys R Us) in their collection:

Searching...
User Wishlists
The following users have Tiger Force (Toys R Us) on their wishlist: