Power of the Force II 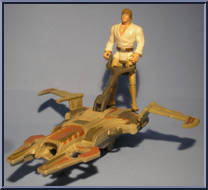 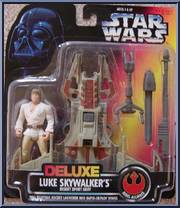 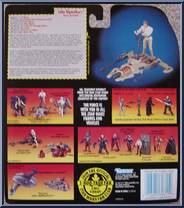 Searching...
Reviews of Luke Skywalker (Desert Sport Skiff) Toy Series
4.50 stars from Mr-X
In every series one will find that a company will make a few figures that serve no point whatsoever. These figures may or may not be short packed but always turn up somewhere, sometimes even for allot of money. For fans they are treasures, collectors want them but for everyone else they are usually junk. Such is the case with the Luke Skywalker (Desert Sport Skiff) combo pack. It was never shown in anything as far as I know and the figure is ugly. I might as well due all both review at once, the Luke figure wont take as long so ill start with him. This Luke comes at 3.75 inches tall and is a repackage of an earlier Luke. This things also ugly, very ugly. Luke looks like He-Man so much its just annoying. Luke is a twiggy farm boy not a bodybuilder!!! He may be in his farm boy clothes but...[See More]
Subseries from Star Wars - Power of the Force II Toy Series
Contribute
The good folks here at Figure Realm try to give you accurate, unbiased, and most importantly, free information on action figures all day everyday! But of course, reviews and an occasional rant can only go so far, that 's why we encourage you to contribute! We're trying to build the largest, most informative, and simplest to use action figure gallery on the planet for every person out there to enjoy. Whether you want to know how many figures are in a series or the name of a certain figure or even if you just want to stare awestruck at all the pretty colors, galleries help everyone. What can you do to help? Glad you asked!