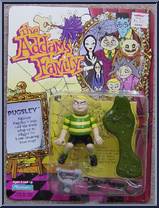 Enlarge
(Push Pugsley's legs, and his arms whip up to trigger his bone-bruising bear trap!)

Appearance: Tubby and appealing in the way that pit bulls are. Only eleven years old, but has his Uncle Festers's frenzied eyes (which Fester wants back). Usually accompanied by his pet squid, Wallace.

Hobbies: Experimenting with his mad scientist lab, exploring places too gross and scary for average kids. Helping his uncle blow up a wide variety of objects.

Quote: "It's just not fair. I get crushed, trampled; why should I have all the fun?"

Personality: Pugsley is the Addam Family's not-so-little rascal. He leads the kind of gleefully tormented life of which normal little boys don't even dare to dream. Like all great Addams men, Pugsley's greatest thrills come from being a constant and bizarre troublemaker. But deep down, Pugsley is too good to actually hurt anyone. He's much happier just sending his victims running away, screaming in terror. Not the brightest boy you'll meet, Pugsley makes up in courage what he lacks in brains. He fears nothing, and will climb into any dark hole, challenge any type of beast, and put anything in his mouth.
Add to Collection - Add to Wishlist - Contribute 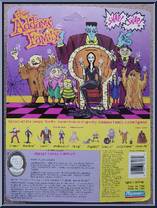 Enlarge
User Collections
The following users have Pugsley in their collection:

Searching...
User Wishlists
The following users have Pugsley on their wishlist:

Searching...
Subseries from Addams Family Toy Series
Contribute
The good folks here at Figure Realm try to give you accurate, unbiased, and most importantly, free information on action figures all day everyday! But of course, reviews and an occasional rant can only go so far, that 's why we encourage you to contribute! We're trying to build the largest, most informative, and simplest to use action figure gallery on the planet for every person out there to enjoy. Whether you want to know how many figures are in a series or the name of a certain figure or even if you just want to stare awestruck at all the pretty colors, galleries help everyone. What can you do to help? Glad you asked!