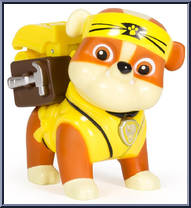 Enlarge
Become a pro at the ancient art of Karate with Pup-Fu master Rubble! This action-packed, karate-themed pup is one excited bulldog, ready to activate his transforming construction digger! Press Rubble's dog tag to transform his Pup Pack into a heavy lifting digger just like in the show! Need some Paw Patrol help? Collect each loveable Paw Patrol pup in the brand new Hero Series and work together as a team! Whether it's Chase, Skye, Zuma, Rocky, Marshall or Rubble, each pup has a unique push button transformation. Save the day by re-enacting your favorite missions and become an Adventure Bay Hero! Together, your child's imagination will be lit up with pup inspired rescue missions full of friendship, teamwork and bravery. Because with Paw Patrol, no job is too big, no pup is too small. Bring home Action Pack Pup Pup-Fu Rubble and then collect them all! 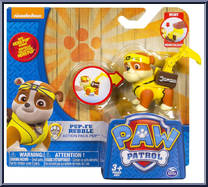