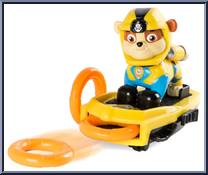 Enlarge
Bring all the action of Adventure Bay home with Rubbles Launching Surfboard! Wearing head-to-tail Sea Patrol gear, this pup is perched on his board and ready to catch some imaginary waves! Always prepared for a ruff, ruff rescue, Rubbles surfboard comes with a life ring launcher. Load the life ring into the launcher, then press the side to shoot the ring and save the day! When you and Rubble arent using the life ring, store it on the side of the board, or load it into the Sub Patrollers launcher (sold separately). With Rubble in hand, kids can let their imagination run wild as they create new rescues for their favorite pup. For an even more awesome adventure, collect all the members of the Sea Patrol, like Marshal, Zuma and Skye! Join Rubble on the underwater case with his Launching Surfboard!

Features
Ride the waves of Adventure Bay on Rubble's Launching Surfboard! This official Sea Patrol toy comes with a life ring launcher, perfect for water rescues!
To use the life ring launcher, load the orange ring into the launcher and press the side to fire away! The life ring is also compatible with the Sub Patroller's launcher!
Assemble the entire Sea Patrol team! Collect all 6 pups and dive into Adventure Bay action!
Rubble's Launching Surfboard is made for kids aged 3+ and ready to surf Adventure Bay's imaginary waves. 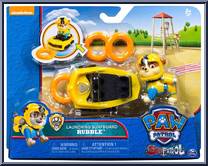 Enlarge
User Collections
The following users have Rubble in their collection:

Searching...
Subseries from Paw Patrol Toy Series
Contribute
The good folks here at Figure Realm try to give you accurate, unbiased, and most importantly, free information on action figures all day everyday! But of course, reviews and an occasional rant can only go so far, that 's why we encourage you to contribute! We're trying to build the largest, most informative, and simplest to use action figure gallery on the planet for every person out there to enjoy. Whether you want to know how many figures are in a series or the name of a certain figure or even if you just want to stare awestruck at all the pretty colors, galleries help everyone. What can you do to help? Glad you asked!