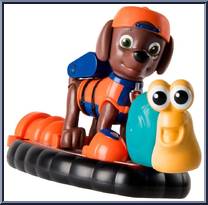 Enlarge
Lifeguard Zuma is on his way to save the day! Suited up in his full Sea Patrol lifeguard uniform, he comes with a cool wakeboard! Put Zuma on his board and ride the waves! For underwater rescues, this pup has a snail sea friend (included) to help out! Kids can collect Marshall, Chase and the rest of the gang, and recreate the excitement-filled world of the Paw Patrol! Doggy paddle to adventure with Lifeguard Zuma!

Features
Go on a water rescue with Lifeguard Zuma! Outfitted in his Sea Patrol lifeguard uniform, he's ready to sniff out excitement on the shores of Adventure Bay!
Always ready to leap into action, this pup comes with a wakeboard! On top of his board he can ride the waves into adventure!
Zuma comes with a bonus sea friend! Kids can use the snail figure to recreate the world of Adventure Bay!
Lifeguard Zuma is for kids aged 3+. Find Marshall, Skye, Chase and the rest of the collectible figures to assemble the entire Sea Patrol! 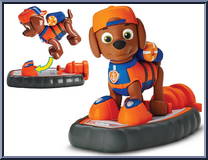 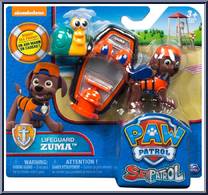